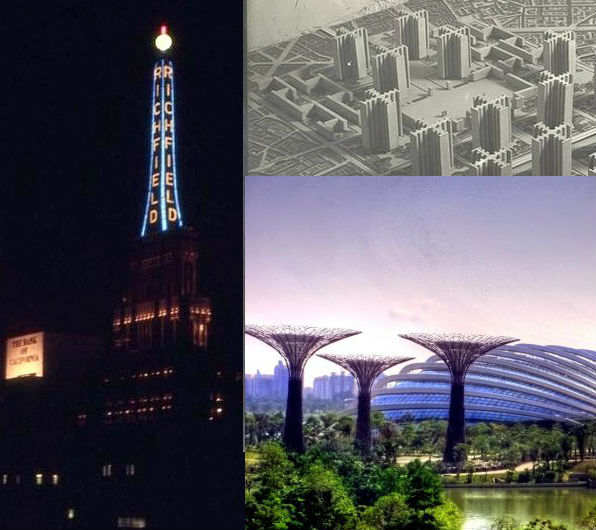 Prior to the 1950’s, the urban core of LA, centered around Downtown, was relatively small. It was also much more compact and vibrant, however, than it became in the second half of the 20th Century. In recent years, there has been renewed interest in urbanism and walkable communities, and LA’s downtown, historic core is now revitalized and booming with new highrise construction.

While LA is just in the early stages of creating an integrated metro system, the region once had a vibrant street car system connecting the urban core with extensions to street car suburbs such as Santa Monica and Pasadena.

According to Curbed LA : “in 1945, a sinister corporation called National City Lines took over the thriving Los Angeles Railway, which served most of the sprawling region. Then, over the course of the next two decades, LA’s extensive streetcar network was eliminated and the iconic Red Cars that Judge Doom mentions were replaced with shiny new buses.

The principal investors in National City Lines? None other than General Motors (a prominent bus maker as well as an automobile retailer), Firestone Tire and Rubber Company, Standard Oil of California (now Chevron), and Phillips Petroleum.”

This conspiracy is depicted in the iconic 1988 film “Who Framed Roger Rabbit.”

This led LA’s urban core, including downtown, to become a blighted wasteland, and increased the demand for new car oriented suburbs where there were once grasslands and farmland.

These new auto oriented suburbs, such as the San Fernando Valley, were much more spread out and less pedestrian friendly than the older Street Car suburbs such as Pasadena. However, they provided a high quality of life for the middle class.

Since then, The Valley has changed drastically as The LA Weekly reported on Middle-Class Flight From San Fernando Valley: “in 1970, 60 percent of Valley families could afford an average house and college costs, far outpacing other urban areas recently evaluated for the same era by the Pew Research Center. Even before the recession hit in late 2007, the Valley had lost a huge swath of middle-class workers, with just 43 percent of families by 2006 earning $50,000 to $149,000 – the identical income group, corrected for inflation, that made up 60 percent in 1970.”

The article also quotes California State University Northridge geography professor Eugene Turner, “It means exactly what we think it means: a growing population that’s not in that great middle class.”

Turner says that “the exodus accelerated in the 1990s as skilled, private-manufacturing jobs were replaced in L.A. with low-paying and increasingly unskilled work.”

The idea of building single family home suburbs made sense in the 1950’s when there was a baby boom and land seemed plentiful. However, the combination of the demographic transformation of the Valley, loss of high skilled jobs, and the limited supply of new housing has led to more sprawl in far out exurbs such as Santa Clarita.

And just as the middle class in the San Fernando Valley was replaced by lower income immigrants from Latin America Steve Sailer points out that the San Gabriel Valley has transformed into an Asian Ethnoburb.

Up in the Bay Area, in much more affluent communities, the Wall Street Journal reports on the The New White Flight in the Silicon Valley community of Cupertino in response to Asian immigration. And according to the 2010 US Census the Asian population of the East Bay Suburbs of Danville, Dublin, Livermore, Pleasanton and San Ramon more than doubled, from 25,232 to 65,575. The rate of this growth does not seem to be stopping anytime soon either, with more and more immigrants completing documents like the i751 every day in the hope of being able to lead new lives in the U.S.

As with much of the Bay Area Asians have also become the dominant demographic in affluent Irvine in Orange County. Irvine, as with the rest of Orange County, has traditionally been a White Republican stronghold but in the last election it voted for Hillary Clinton over Trump.

Mentioned in an article for the blog Urbanize LA by Jason Lopata on the origins of the NIMBY movement, urban critic Mike Davis, has argued that “although many of the movement’s concerns about declining environmental quality, traffic and density were entirely legitimate, ‘slow growth’ also had ugly racial and ethnic overtones of an Anglo gerontocracy selfishly defending its privileges against the job and housing needs of young Latino and Asian populations.”

Urbanize LA is a voice for the pro-density YIMBY movement that is overall very pro-immigration. However Lopata and Davis make an important point.

The original NIMBY movement in LA in the 70’s and 80’s was not just a reaction to increasing density and aesthetic changes, it was also a reaction by the traditional White Middle Class to the demographic transformation of California.

For example, if one listens to AM Conservative talk radio in Southern California, whose audience is largely made up of older middle class Whites, there is strong opposition to mass transit, density, and hysteria about Agenda 21. Their stance against urbanism, while reactionary and misguided, is an implicit reaction to demographic changes.

Architectural aesthetics are heavily connected to demographic changes and tensions. One example is historic preservationist opposition to ‘Persian Palaces’ built by wealthy Iranian immigrants on the Westside of LA which stand in contrast to Western aesthetics such as Spanish Colonial, English Tudor, and Mid Century Modern.

While I reject crude American chauvinism, my primary critique of immigrant’s aesthetic preferences is more a reflection on what LA is world renown for: crass materialism. This tends to attract people from all over the world who want to make a fortune rather than implement grande aesthetic visions and why McMansions are prolific in wealthy Iranian and Asian Ethnoburbs.

However, Tehran, Iran’s Niavaran Residential Complex provides a model for building functional and aesthetically pleasing communities. Niavaran was “designed by Iranian architect Mohammad Reza Nikbakht, Niavaran Residential Complex is located in Tehrans, Shemiran area. Shemiran, being spread along Alborz Mountains slope, used to be a summer resort of Tehran until 40 years ago due to its numerous gardens. Unfortunately, many gardens with old trees in the area have been destroyed by urbanization projects over the last century.

The parcel of land allocated to this project accommodates a number of these old trees too, whose conservation has been considered as the first priority in designing this complex. Mohammed Reza Nikbahkt took a different approach by building around existing trees in order to preserve them.”

While opposition to demographic change and concerns for architectural aesthetics are totally rational, the problem with White NIMBY’s is that, to quote the infamous 14 words: “we must secure the existence of our people and a future for white children.”

The reality is these White Boomer NIMBY’s might be thinking about the immediate impacts of development and demographic changes on their neighborhoods but they are not taking into account a future for their children and grandchildren.

Many of these middle and upper income single family home neighborhoods are rapidly ageing. Homes are being bought up by wealthy immigrants, and White Millennials in Urban California are either living at home to save on rent, leaving California altogether, or, if they have a decent job or a trust fund, become childless urban Hipsters.

While Conservative NIMBY’s have failed to provide a solution, at least they are somewhat ideologically consistent. The same cannot be said of the other major driving force behind the NIMBY movement: Wealthy Liberals who hypocritically promote mass immigration.

A NIMBY Ballot Measure in LA was supported by actor Leonardo DiCaprio, for example and Open Borders advocate Rob Reiner opposed a Whole Foods on a vacant lot in Malibu.

Writing for the Unz Review, Steve Sailer bemoans the hypocrisy of the ultra-exclusive city Malibu declaring itself a sanctuary city, and recalls the Reiner incident in particular: “It’s not that Rob is against Whole Foods, it’s the principle of the thing: the idea that Malibu might change, that more people might come to Malibu, that people from the