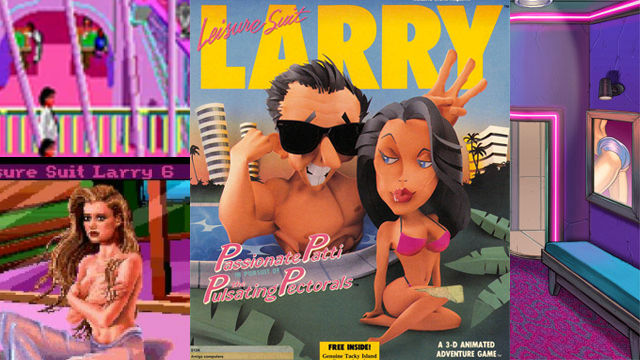 The music from the game
1981’s Soft Porn Adventure
How Al wanted to make a comedy game
The main character Larry Laffer
Larry as a loser and sleazy, but guys can relate to him probably more than they would want to admit
How young people today are able to identify with the character of Larry through their online dating adventures
The fan song feel like leisure suit larry
Al’s point that the game is not about the “sleaze” but a satire
The portrayal of women in the game who get the upper hand on Larry
How the early games had only text and no voice for Larry
The Adult Video Game genre and nudity in the game
How the old Larry games were difficult, and you could actually get stuck if you forgot to do something or ran out of money, and there were totally unpredictable ways of dying. In some cases clues were very minimal
The groundbreaking software innovations of Sierra Entertainment in the 80’s
The aesthetics of the game, Vaporwave and 80’s nostalgia, and Al’s point that he was just going with the style and limited color pallet of the time
Video Games as Art
Brandon’s point that the essence of the game is exploration rather than winning
Nontoonyt Island, the tropical setting in Leisure Suite Larry 2 which has been transformed into a resort
The Casino Aesthetic, City of Lost Wages, and “Ceasars Phallis”
How in Leisure Suit Larry 5 (1991) there’s a “Tramp International Casino” which is clearly a reference to Trump and now Trump is president
The Alicia Silverstone look a like in Leisure Suite Larry 6
The process of creating a character
“Save Early, Save Often”
Rumors that Glen Quagmire from Family Guy was based on Larry Laffer
The Planned Leisure Suite Lary TV show in the 80’s with Sony
The Leisure Suite Larry Calendar
The Leisure Suite Larry look a like contest
The Reloaded Edition
Sierra’s Game “Kings’s Quest”
The Game “The Manhole”
Al’s game Torin’s Passage
The effects of political correctness on video games
Al’s free daily jokes at his Humor Site