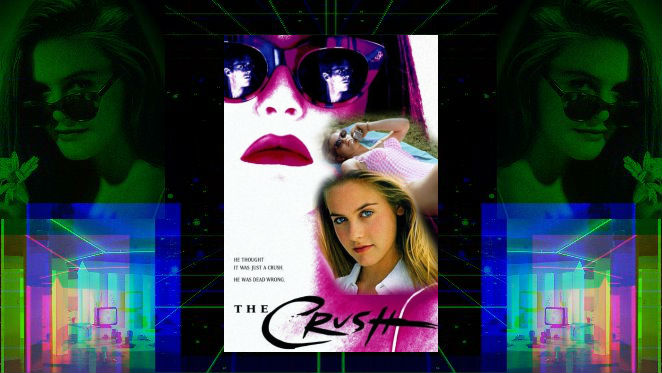 The plot of the Film; Journalist Nick Elliot rents a guest house from a wealthy family, where their teenage daughter
Adrian(Alicia Silverstone) becomes obsessed with him
Whether Adrian is in love with Nick or just playing a psychotic game with him
How despite her psychosis, Adrian has a sweet feminine charm that is lacking in many female roles today
The films portrayal of a dark side of female sexuality
The Films Fatal Attraction, Basic Instinct, Gone Girl, and Ex Machina
How the film portrays an old school WASP culture that is non existent today
Nick’s restrained Anglo-Saxon persona
The father Cliff Forrester threatening Nick
The most chilling scenes in the film
The erotic thriller genre, and how that genre peaked in the 90’s,
Entrapment and False Rape Accusations
The Crush as a tragic love  story
The Crush as a reverse Lolita
Nudity in film; the use of a body double in the Crush; Fatal Attraction, Last Tango in Paris, Brooke Shields in Pretty Baby, The Wolf of Wall Stree, Alexis Dziena in Broken Flowers
The early 90’s Grunge aesthetic of the film, and 80′ influences; Vaporwave
The setting of the film in Seattle, filmed in Vancouver, Canada
Amber Benson as Adrian’s friend Cheyenne
Alicia Silverstone as the ideal of beauty; Sarah Michelle Geller in Cruel Intentions, Mena Suvari, Taylor Swift, Halston Sage, and Kazakh Volleyball player Sabina Altynbekova
Alicia Silverstone’s Interview on John Stewart’s Show in 1994
How Alicia Silverstone’s character is the inspiration for the romantic interest in Robert’s upcoming novel
Fifty Shades of Grey, and Charles’ personal connection
Our upcoming show on Clueless