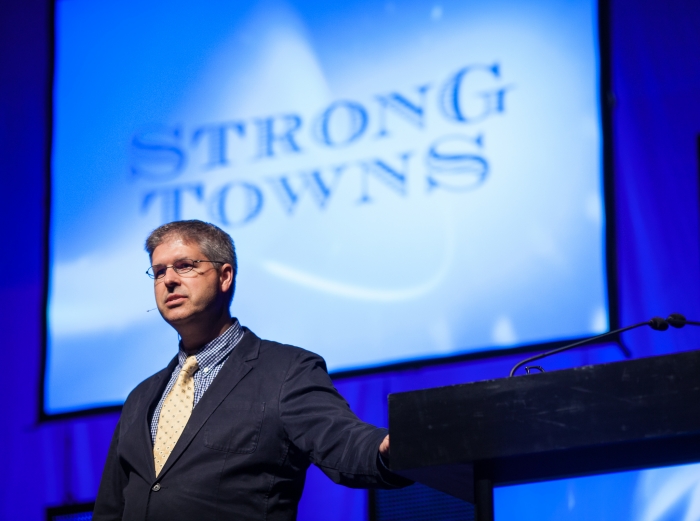 Robert Stark and co-host Pilleater talk to Charles Marohn. Charles is a Professional Engineer (PE) licensed in the State of Minnesota and a member of the American Institute of Certified Planners (AICP). Chuck is the Founder and President of Strong Towns. He has a Bachelor’s degree in Civil Engineering from the University of Minnesota’s Institute of Technology and a Masters in Urban and Regional Planning from the University of Minnesota’s Humphrey Institute.

How Charles’s background in urban planning exposed him to the problems of sprawl development
Charles’s books Thoughts on Building Strong Towns, Volume 1 & Volume II
The fiscal unsustainability of sprawl development
Charles’ point that the key factor in urbanism is Incremental Development
Charles’s point that cities must be viewed as ecosystems
The “build it they will come” fallacy, and how traditionally massive infrastructure projects were designed to serve existing population centers(ex.Roman Aqueducts)
How pre-automobile cities tend to be the most viable
Nassim Taleb’s Antifragile theory, and how it relates to urbanism
The Density Question, Charles point that density should neither be fetishized nor seen as inherently bad, but must take into account incremental development
How cities such as New York and San Francisco have value independent of their economies, while places like the Silicon Valley would become unviable if their industries collapsed
Zoning laws and land use regulations
The movement to Retrofit Suburbia, how it’s a step in the right direction, but has it’s limitations
How cities will contract in the future, with people living in both cities and towns, but that it’s the space in between that’s unviable
Micro Apartments
Political divides, and how when it comes to planning issues on a local level, people tend to be more pragmatic than dogmatic
The Public vs. Private sector role in infrastructure, and how Charles’s point that things that are high risk should be in the private sector, and low risk in the public sector(ex. Wall Street baillouts)
The role of the government in historic preservation and protecting the environment
Housing and affordable family formation